The emergence of voice search is intensifying the need for brands to be able to provide informative content. Branded3’s Stephen Kenwright says time is running out for those yet to adapt. 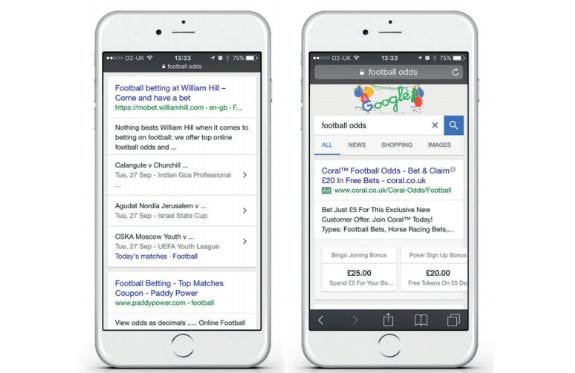 We often overstate the importance of algorithm updates. Gearing up for Google’s mobile-friendly update in 2015, or the upcoming ‘mobile-first’ index, we overlook a simple truth: Google is chasing its tail. Algorithm updates don’t affect the way people search. Google updates its algorithm to catch up with how its users are already searching.

Mobile vs. Google vs. Bing
Let’s get something out of the way: Bing is about to be huge. In an average month in the UK, Yahoo! and Bing attract 78% of the user base Google does.

Bing will take the spotlight as the conversation moves towards voice search, and it will — comScore suggests 50% of all searches will be conducted using voice by 2020. Microsoft’s search engine powers Cortana — 100 million active users; a third as many as Twitter – but also Siri and Alexa.

Anyone interested in bingo should be all over Microsoft’s search engine anyway, skewed as it is towards an older audience (who are much happier to convert), but the fact is that 50% of searches on Google are conducted on a mobile device and Yahoo! and Bing reach 25% between them. The disparity is simply because Google owns Android – and paid $1bn to be the default search engine on iPhone – whereas Windows Phone hasn’t really made an impact.

Mobile vs. desktop
Working in digital it’s easy to forget that not everyone sits at a computer all day – and mobile reaching 50% of searches last year is only half the story. Overall, mobile usage is consistently higher than desktop in every single demographic.

For internet users less than 24 years of age mobile is used 2.5 times more than desktop, which makes mobile-first a clear strategy for high street staples such as Ladbrokes and William Hill when they’re looking to engage a younger audience for their sportsbook accounts. Usage is consistently approximately 50% higher on mobile than desktop across other demographics, so this is effectively a hedged bet.

With the exception of the 35-44 demographic, women consistently spend more time online on a mobile than men, which should be of particular interest to bingo brands and affiliates. The coveted 45+ demographic of high-spending women are more active on mobile (the corresponding male groups are more active on laptop and desktop computers), again spending 50% more time on mobile than they do on desktop.

Position one vs. everyone else
As voice search grows in importance, so does position one. Search engines have been moving away from ‘10 blue links’ for years, adding rich answers, local listings, more paid ads and more besides; but voice search is inherently conversational – for each question there is one clear answer. This means that to prepare for voice search over the coming months, marketers should be obsessing over rich answers and added value.

A search for odds is a clear question and a page needs to be marked up accordingly; a search for information often backs that up, and right now brands are failing to provide the informative content that is needed to compete with the BBC and broadsheets. When it comes to organic search, igaming is more reliant on position one than perhaps any other medium. More than 21% of all searches result in a click on the first organic listing.

We analysed the click through rate on mobile devices in April 2016, and then again in September, in an attempt to understand how the addition of a fourth PPC ad on mobile affected the split between paid and organic search.

Extensions including fixture lists, sign up bonuses and odds – combined with rich answers for many of these questions organically – make the disparity between first and second rankings more stark than in almost any other sector. It’s not all doom and gloom for organic search though — regardless of the space taken by paid listings, more than 60% of the clicks across igaming searches still go to results we can influence with SEO.

Mobile to accelerate further
It would be foolish to argue that the landscape isn’t changing, but we need to recognise that the change that’s happening is being driven by users. The biggest shift that brands haven’t quite got to grips with is the move from desktop to mobile. This isn’t going to continue – it’s going to accelerate.

The best bet igaming brands and affiliates have if they’re going to win is to invest in answering searchers’ questions. As well as being solid preparation for voice search, this is going to be key for both mobile and desktop search moving forwards.

Despite the dominance of paid search, the sun is still shining for keyword-based search, but this can’t continue. We have a year, at best, to get a better understanding of what searchers are looking for before we’re forced into an audience-based search model that’s designed for paid and that’s less than ideal for SEO.