Sam Raife reviews brand visibility and the strongest performers on some of the competitive search terms in the casino and betting SERPs last year. He looks at what SEOs can learn from this 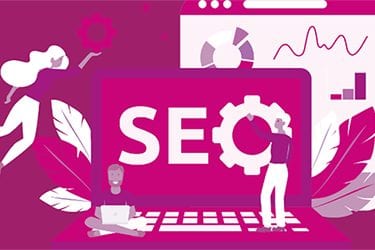 Last year was a turbulent one for the companies traditionally dominating the search engine results pages (SERPs) for key search phrases, with even some key brand terms becoming less reliable at crucial points in the gaming calendar. From a brand perspective, Bet365 continues to dominate the market in driving direct brand traffic through its five million monthly impressions. There were only two points in the betting calendar, at Cheltenham and the Grand National, when this wasn’t the case. For these two meets, the event spoils went to Sky Betting & Gaming and William Hill. The chart below highlights the battle for branded searches and search interest in the top six gaming companies in the UK: The key lesson here is that although Bet365 is continuing to generate the largest amount of organic interest of any company, in 2019 their site was challenged during two key dates in the horse racing calendar. On both occasions they lost ground to competitors. The Bet365 site took a massive hit during the ‘Google birthday update’ when the core of its E-A-T algorithm was re-engineered. This had an adverse impact on sites that, just seven weeks before, thought they were being celebrated for their great content, as shown in Fig 2 here: Bet365 not only took a hit in rankings in late 2018, but the website additionally saw stagnation for the rest of the year as a lack of concentration on creating strong content occurred. But when you have five million monthly searches for your brand, you probably don’t need to worry about it.

In the face of a global pandemic that has brought sport to a standstill, the importance of product diversification in the igaming sector has never been so prominent. At the centre of that are the top performers in the online casino space – those that are best placed to make moves in 2020 to secure opportunistic revenue.

We’ve taken some of the most competitive terms in the Casino SERPS and used the SEMrush Market Explorer tool to dig a little deeper. The tool provides market insight based on the sites considered similar to one another. The tools breaks this insight into four ‘quadrants’ or market sectors described as: Game-changers: emerging websites with a high growth potential. Leaders: fastest-growing websites attracting a large audience. Niche players: newbies or smaller companies with a low growth rate Established players: stable players with established popularity (see Fig 3): Looking at the game-changers and niche players, we can see netbet.co.uk gained ground throughout the year on unibet.co.uk, with the end of the year also seeing strong growth for novibet.co.uk (see Fig 4): Netbet.co.uk had two campaigns that ran particularly well between July and September. The first, Women’s World Cup in numbers, received coverage within reuters.com, euronews.com and localised publications such as nottinghampost.com. The impact of these content marketing campaigns helped to temporarily boost rankings. However, at present, the site appears to have reduced the number of campaigns gaining momentum in mainstream media, which may explain the stagnation in Q4. Unibet, on the other hand, employed a different tactic by using quality blog content. The site spent last year dedicating time, effort and value into their blog and the tactic was rewarded with some nice organic pick-up. One of their tactics involved employing ex-Formula 1 star Mika Häkkinen to write engaging and thought-provoking posts drawing on his experience and expertise and resulted in 58 links across a series of summer blog posts. The result? Unibet’s ranking for the term “F1 betting” jumped from 14th to 7th.

The graph on Fig 7 charts the vast increase in numbers of domains across a short timeframe. The peak of 587 domains are split across 457,000 backlinks:

On initial analysis, kingcasinobonus.co.uk’s backlinks seem to focus around a simple tiered black hat model, where the site is taking advantage of private blog networks that have manipulated authority, through a diverse, simulated backlink network. An example of such a link is highlighted in Fig 8: On closer inspection, however, the site has also obtained coverage on key, niche sites that are well trafficked, write original content and have a genuine user base. The sites are used regularly by the igaming SEO community due to their agreeable nature for adding followed links in exchange for a well-written article – and an upload fee, of course. They tend to be found on most major backlink profiles. The strategy has worked for the site, which I would imagine has been set up as a ‘churn and burn’, but has stayed within the right lines during the growth by: ● Buying links with authority from real websites. ● Using mainly branded or naked anchors. ● Featuring original, useful on-page content. ● Pointing most links to the home page, then picking three or four pages to split additional authority to. The key differentiating factor, and the reason the site has performed so well, is the focus on the on-page content. The site is well laid out and written in good English. The questions asked are comprehensive and each page is meticulously designed to ensure an easy user and search engine experience. In conclusion, kingcasinobonus.co.uk has successfully manipulated the SERPs through an accelerated growth that probably cost a great deal of marketing spend. However, the time was well spent on the website and the content, which has been a core focus of recent algorithm updates.

In 2019, the sports betting industry saw a shift towards aggressive PR tactics. The tips market is a perfect example of this due to the micro-economic factors that make up this SERP (see Fig 9): Searching for ‘football betting tips’ has seen a battle for the top spot throughout the year between two websites with very different offerings. ● Freesupertips.com, which focuses on content, match previews and tips. ● OLBG.com, which offers a unique tipping system based on community input. Both companies have seen success in the news during 2019 (see Fig 10):

You ate all the pies (freesupertips.com)

The campaign to be the Premier League’s stadium pie taster (see Fig 11) was picked up by local media and some national publications. According to Majestic, the campaign earned 14 backlinks, but actual coverage was probably higher. The campaign helped to solidify a site migration from dot.co.uk to dot.com and at the same time drove traffic, shares, brand awareness and no doubt revenue for the company in a uniquely cost efficient format. The campaign focused on a single press release and the cost of a prize, ensuring a strong return on investment where the PR and outreach was concerned.

Fans of the EPL (OLBG.com)

In contrast to the freesupertips.com campaign, the ‘Fans of the EPL’ piece created by OLBG.com (see Fig 12) focused on utilising data to drive multiple angles across targeted press releases. Using Majestic as a comparison, the campaign has driven 201 links across 35 separate domains. While the campaign saw coverage in national and local media, it also allowed for diversification into additional sectors such as computers and technology media such as Gizmodo. This sort of multi-angle approach has ensured that the site has continued to earn natural and organic backlinks from national media and enabled new angles to be developed throughout the year. The results show a solid top-three position for ‘football betting tips’ for the last nine months.

The betting market has continued to be the most competitive and diverse SERP to operate in. There is a visible shift, in reaction to better algorithms such as E-A-T, B.E.R.T and core updates, to focus on the quality of the content, not just the volume. Google is getting better at spotting private blog networks, but they probably still add some level of initial authority to the SERP due to the fact that nearly every site has the same links. The gradual shift to PR-led campaigns will help secure better coverage, increased brand awareness and longer-term rankings, but there will always be market game-changers that disrupt the original strategic approach. In conclusion, the three takeaways for competing in igaming SERPs in 2020 are: 1. Spend the time and money on creating well-written, user-friendly content. 2. Build links using PR, but the campaign must be relevant. 3. Buying links probably still adds some authority, but you will be capped in success if this is your only focus.