While the majority of affiliate programmes work with some form of click tracking, the nature of voice search means there is no click. John Campbell discusses how affiliates can best monetise voice search and apps 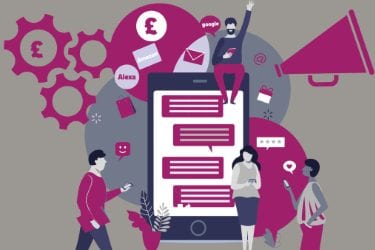 On 6 November 2019 Alexa celebrated its fifth birthday. In that short period of time we’ve seen a huge shift in user behaviour around voice search technology. More than one in five UK households now has a smart speaker, with people increasingly integrating them into their daily lives. This shift to voice is resulting in people reducing their interactions with webpages, search engines and mobile apps. As with any change in user behaviour this creates an opportunity and the first question for any affiliate spotting an opportunity should be: how can I make money?

In the grand scheme of things, voice search is relatively new. As such, there is still a lot of confusion about what the technology actually is. Would someone who asks Spotify to play jazz songs count as voice search, for example? This hasn’t been helped by the ‘50% of searches will be via voice in 2020’ statistic that was wrongly attributed to Comscore and misused by many. (The statistic actually came from an interview with Andrew Ng of Baidu, during which he spoke about voice and image search in China where the use of voice is much more prevalent than here in the UK.) However, data does exist to support the claim that more and more people are turning to voice search. Multiple surveys from voicebot.ai have ‘asking a question’ in the list of the most popular interactions with smart speakers. It’s also possible to see data on voice searches in the Alexa Answers platforms. Stats show the number of times answers provided by the public have been used by Alexa. When people use voice search, Amazon and Google use various sources of information to provide answers. This creates an opportunity for nimble affiliates to provide content which answers those questions. So then, what is the best way to make money from voice search? The problem is the lack of a click. The majority of affiliate programmes work with some form of click tracking. However, the nature of voice means there is no click. For example, a voice search on Google for “Who are the favourites for the Euros?” returns an answer from Sky Bet (in the majority of such searches Google uses information from the ‘answer boxes’ you see at the top of organic search results). The following answer is read out: “According to Sky Bet the favourites are England, 4/1; Belgium, 5/1…” and so on. In this example it could easily be an affiliate website providing the answer. However, the user never gets to visit a webpage, which leads to no opportunity for users to actually click a trackable link. A small fraction of voice searches do have Google Assistant following up and sending a link to the user’s phone, but this only happens in the minority of cases. For affiliates, voice search should be viewed as a branding opportunity to create an association with your brand by answering questions relevant to a topic. Remember: result types could change in the future and those occupying voice search results will be best placed to reap the rewards.

All three of the big voice platforms – Alexa, Google Assistant and Bixby – allow third party developers to create their own voice experience. Amazon Alexa has Skills, Google Assistant has Actions and Bixby has Capsules. The core functionality and features of these systems are very similar with only slight variations between the three. So far, the majority of the voice apps on these platforms fit into three categories: gaming, entertainment and utility. ● Gaming: Trivia Hero (Alexa Skill). A general knowledge quiz against the clock. ● Entertainment: Read Along With Disney (Google Action). This adds a background track as you read a Disney story book. ● Utility: LV= (Alexa Skill and Google Action). This allows insurance customers to ask questions about what is and isn’t covered in their policy. Before looking at how affiliates could make money via voice, let’s examine how existing voice apps are making money from voice: Marketing funnel: Acting in a similar way to your social channels, your podcast or other content marketing channels, voice can be used to deliver a positive experience for your brand. Direct sale: The voice app could be used to purchase your product. Examples of this already live include reordering on Just Eat and pre-ordering your coffee with Starbucks on Alexa. In-voice app purchase: (In-skill purchase on Amazon and digital transactions on Google). Your app as digital content that can purchase, for example, extra lives in a game or access to exclusive content. With more control over the experience compared to voice search it’s now possible to create a voice app that has an affiliate monetisation mechanism to it. Possible executions could include voucher codes unique to the affiliate, or a lead generation app where you capture details to send on. On the Google Assistant it’s possible to move the conversation from a smart speaker to the user’s phone, at which point a click is possible. Voice apps, like mobile apps, websites, or social accounts, still require promotion. How are people going to know the phrase they need to say in order to invoke your voice app? Some developers jumped on the opportunity early and snapped up obvious phrases such as “find my phone”, so people naturally say, “Alexa, find my phone,” and thus inadvertently open a specific voice app. Other developers use social promotion to push their apps, and those with existing voice apps have been known to use messaging in one voice app to promote another one. My advice for any affiliate looking at voice search and voice apps would be to start now. Getting in early allows you to build authority and improve your voice experience over time and thus reap the rewards in the long term. We’ve already seen this trend with traditional search engine optimisation, with those who invested early in SEO reaping the rewards and opening up a big gap between them and their competitors.