The letter sent to UK affiliates by the ICO requesting them to stop spamming customers with SMS messages sent shockwaves through the UK igaming sector. Joanne Christie investigates. 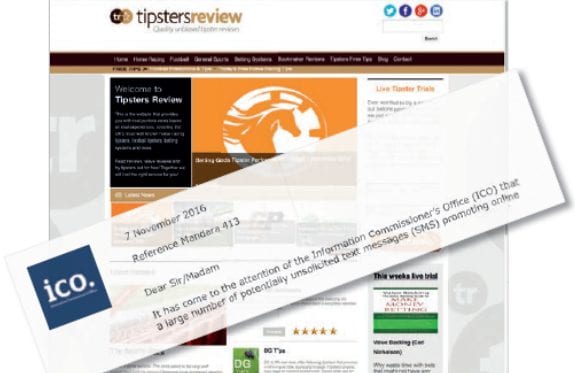 The information Commissioner’s Office (ICO) issued a press release on 11 November that said it would contact igaming “companies demanding to know how they use [people’s personal information] and send marketing texts, including how they obtained the information and how many texts they send”.

In fact, just a few days earlier, on November 7, the ICO had sent a letter to hundreds of UK affiliates with the opening paragraph stating: “It has come to the attention of the ICO that a large number of potentially unsolicited text messages (SMS) promoting online gaming sites have been sent by affiliate organisations including yours.”

The letter then goes on to demand that within 21 days recipients respond with detailed answers to 11 questions, some of which had nothing to do with SMS, for example, a request for a copy of the affiliate’s contract with Income Access, the named source of the details of affiliates which had been sending texts. It also outlines the penalties it is able to dish out, including a £500,000 fine.

Scott Beckman, who runs the affiliate website tipstersreview.co.uk, says he was “puzzled” then “worried” by the letter. “When I got the letter I first thought it was some spam/scam but upon checking up exactly who the ICO were I began to get a little concerned especially when the letter said that huge fines could be applicable to me.”

Beckman says that although he doesn’t use SMS marketing, he spent several hours responding to the questionnaire and sent it to the email address on the letter. “I never believed that I had done anything wrong as I have never used an SMS service whatsoever for marketing purposes and always obtained all terms and conditions. However, I was rather concerned how the ICO obtained such information including my names, company name, home address and email.”

CRTC-ICO request info from Income Access
Beckman had only recently signed up to the affiliate management specialist Income Access and had yet to promote any of its products when he received the letter. “I’d just joined, I hadn’t promoted one single product. I was pretty unimpressed by it. I certainly haven’t promoted any of their products after that, although I was due to.” Beckman contacted the affiliate manager he was in touch with at Income Access, who sent a reply similar to that which was posted on the Gambling Portal Webmasters Association (GPWA) forum on November 11.

In that post, which followed a flurry of posts from angry affiliates, Allan Petrilli, head of affiliate services for Income Access, said the company had not been approached by the ICO but that it had previously responded to a demand from a different regulatory authority for contact details of its UK users.

As the furore continued, Petrilli made a further statement on November 16: “Following our message on Friday concerning letters sent by the ICO to UK affiliates, Income Access would like to provide you with more details about the sequence of events that led to the ICO’s actions.

We have now learnt that the ICO was investigating a large volume of complaints regarding electronic marketing of online gaming/gambling industry related services, and as a part of its investigation the ICO requested the Canadian antispam regulator, the CRTC (Canadian Radio-television and Telecommunications Commission), to serve a “Notice To Produce” on Income Access.

Income Access would encourage all UK affiliates who received the letter to respond to the ICO and clarify their marketing practices, as it would appear from affiliate feedback that the ICO adopted a ‘blanket’ approach of contacting a large number of affiliates due to the difficulty in distinguishing between those affiliates who are and are not engaged in SMS marketing.”

So the ICO asked the CRTC to obtain all those UK affiliates’ details and adopted a ‘blanket’ approach of sending correspondence to a large group of people knowing it may not be relevant to many of them.

Ironically, by accusing affiliates of texting without checking how many of them did actually promote igaming sites in this way, the ICO has been accused of doing exactly what it claims to be trying to safeguard the public from – sending out spam. As the old saying goes, if it sounds and looks like spam (albeit by post) then it most probably is.

Given Income Access specifically stated that it did not support SMS messages and did not hold any information about the SMS activities of the affiliates it provided details of, the approach taken by the ICO seems rather heavy-handed.

The letter should perhaps have suggested they ‘may have’ sent SMS messages, not that it had information they had sent SMS messages. When asked about the letters by iGaming Business, the response from the ICO was somewhat bizarre. A spokesperson stated that: “Our intelligence suggests affiliate marketing is being used by some companies in the gambling sector.”

The gambling industry has long been one of the heavy hitters when it comes to affiliate marketing. Even going as far back as 2004, 2005, 2006, gambling has always been one of the most active sectors for affiliate marketing. It is slightly puzzling therefore that a government department describes a fact that everybody in the industry already knows as something it needed ‘intelligence’ to find out. It suggests, rather, that it knows very little at all about the gambling industry.

We asked the Gambling Commission whether or not it was consulted by the ICO with regard to the issue, but it declined to comment. The motivation for the sudden interest is also unclear. The ICO spokesperson said: “The campaign is part of an investigation by the ICO into large numbers of spam texts linked to the gambling sector. 100s of spam textsabout gambling have been reported to us this year.”

Hundreds of texts across the entire gambling industry would hardly seem enough to warrant the action taken by the ICO.

Cock up or conspiracy?
Indeed, it sent us a link to a page relating to recent action it has taken against firms for spam text, which highlights the case of Rainbow UK, which was fined £20,000 for sending 21,000 spam texts about payday loans over four months last year. In a Microsoft Excel file available on the same page, there is a breakdown of concerns reported by month, type and content in 2016. The number of texts related to gambling fluctuates between 129 and 241, with no clear upward trend month-on-month.

Many are questioning whether there is another motive to the letter, with some believing it was an exercise in data capture about UK affiliates, perhaps with an eventual view to bringing in a regulatory regime or licensing process for these affiliates. Certainly some of the data requested from the ICO doesn’t seem to have much to do with SMS – one of the things it asks for copies of “if you engage in email affiliate marketing linked to Income Access copies of any creative or merchant material”.

The ICO confirmed it had received replies that made clear the recipients of the letter had not done anything wrong, although it declined to say how many. After sending in his response, Tipsters Review’s Beckman received an email the following day from David Clancy, investigations manager at ICO, which said: “From your response it would appear that you might appear within this category and are therefore outside the scope of this investigation.”

Reassuring for Beckman and the others who received similar emails, although not before some serious worrying and in some cases money spent on solicitors. It also seems surprisingly easy to throw the ICO off the scent, a simple email stating the affiliate doesn’t take part in SMS marketing of any kind and the ICO is satisfied.

One thing’s for sure though, it has ruffled a lot of feathers and perhaps irreparably damaged relationships between affiliates and Income Access. It’s worth noting that, Income Access was legally compelled to provide the information; as part of a UK Plc following its acquisition by Paysafe it had no choice in acquiescing to the CRTC-ICO request and is likely to be under gagging orders preventing it from providing any further explanations.

Nonetheless, many affiliates feel angry that they weren’t warned beforehand. Whether or not the letter was a fishing expedition for other purposes – we asked the Gambling Commission if it had any plans to introduce a regulatory scheme for affiliates but it declined to answer – or just an ill-thought out cock-up by a government department that doesn’t really have a clue about the industry it’s looking into, remains to be seen.