A new speed report is being unveiled in Google’s Search Console. Julia Logan buckles up and runs through what SEOs and site owners need to know 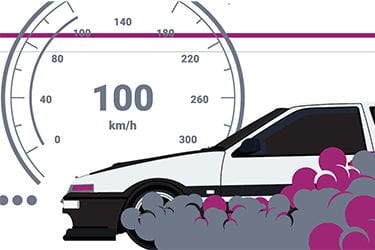 Google has recently rolled out the new speed report in its Search Console (GSC). As you’re doubtless aware, page speed is an important factor for the search engine giant, so let’s have a look at this new report and find out how site owners can get the most out of it. On its help pages, Google lists a number of reasons why speed matters. It states: “Longer page load times have a severe effect on bounce rates. For example: ● If page load time increases from one second to three seconds, bounce rate increases 32%. ● If page load time increases from one second to six seconds, bounce rate increases by 106%.” It goes on to declare that “pages considered slow may be demoted in Google Search.” The principle of the Google Search Console speed report is similar to that of the company’s standalone PageSpeed Insights (PSI) and Chrome’s Lighthouse tool. What’s different is that you can now track the changes in your site’s speed over time (combined with the performance report, it makes it clear how speed issues can affect the site’s organic performance). Also, while the PSI and Lighthouse tools only let you analyse one URL at a time, the GSC speed report gives you aggregated data for all URLs on your site. It also lets you dig deeper into specific issues and groups together those URLs with the same issues. It is worth noting that the GSC speed report is based on the Chrome User Experience Report, which provides metrics for how real-world Chrome users experience sites on the web. You can already see this “field data” in the PSI tool for sites with sufficient popularity. This means that for a new site (or one with a low amount of traffic) there won’t be any data available in the GSC speed report. In this case, you will have to stick to either PageSpeed Insights or Lighthouse.

Similar to the PSI tool, GSC speed report provides separate data for mobile and desktop users (see Fig 1, below). Unlike PSI, though, it does not assign an absolute score to URLs; rather it grades them as slow, moderate or fast, based on their speed and performance.

By digging deeper into specific issue types highlighted in the report, you can see the total number of similarly affected URLs (see Fig 2 below). However, clicking on that number only gives you a list of up to 20 URLs – it’s impossible to get the entire list, even if you use the CSV export feature. The report does not provide detailed diagnostics either but instead links to the PageSpeed Insights report for the given URL. I would expect a report inside GSC similar to the URL inspection one, but surely if the standalone tool is still available, this may make more sense than duplicating everything inside the GSC.

It appears that the main criterion for the reported issues is the time to the first contentful paint (“aggregate FCP”). For those unfamiliar with the term, this is the time it takes the browser to render the first visible element on the page. The affected URLs are grouped by the time to FCP, i.e. there may be 3 groups of URLs in the moderate status: some would have an aggregate FCP of 1.5 seconds, others would have an aggregate FCP of 1.9 seconds and yet more would have an aggregate FCP of 2.2 seconds. Do bear in mind that the reasons for the slow performance of each particular URL grouped into the same batch may be different and would still require a thorough technical audit of the site. Once the issue has been sorted, there is a button to validate the fix similar to the one in the coverage report (Fig 3). What this does is simply reset the 28-day timeframe during which Google monitors the user statistics for your entire site. Whether or not the issue is considered fixed will be determined at the end of this four-week period. Importantly, starting validation does not trigger re-indexing or any other active behaviour from Google. If any of the URLs are still suffering from the issue in question, the validation will fail. Should insufficient users visit the site during the new timeframe, Google will be unable to verify the fix.

Rolling out the speed report within the Google Search Console has not affected any other existing reports – the speed data hasn’t been added to the performance report (which may have been useful), nor to the URL Inspection tool. Unlike the URL Inspection tool, it doesn’t let you analyse a random URL of your own choice (you still have to use the PageSpeed Insights tool for that, minus the historic speed data). It’s also not possible to compare two URLs like you can with the performance report. Considering that Google labels the new report as experimental for now, perhaps we will see changes in the way it is presented within the GSC and integrated into the other reports later on. Clearly, the importance of the new GSC speed report is in highlighting the benefits of having a fast site for both desktop and mobile users. In the igaming industry, rare sites can boast of great speed – this is an issue I first mentioned in issue 72 and a quick check confirms that nothing has changed much since. If affiliate sites at least try to work on fixing their speed issues, one has to question whether most brand sites will even be aware of the problem. Their mobile speed is typically even worse than their desktop speed. As a result, the user experience suffers. To sum up, paying attention to the highlighted speed issues and eliminating the technical debt will be a beneficial long-term strategy. It will improve the organic performance of your site – and the user experience of your visitors.