Streaming is established as a huge component of the console gaming ecosystem, and the first generation of igaming streamers is beginning to emerge. This has the potential to become far more than just another affiliate marketing channel, writes JULIAN BUHAGIAR 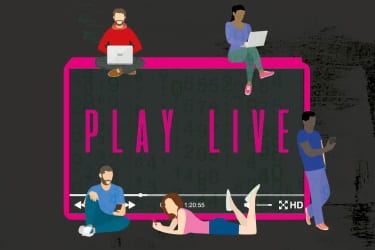 Watching Xposed play live blackjack on Twitch is a strangely serene experience. Contrary to most other gambling streamers, he’s soft-spoken and fluidly pivots from conversing about the best SpaceX launches to his beloved Camaro while hitting on a Q-J pair. You toast his highs on a pair of Aces, and even share his pain when he suffers a losing streak. In fact, if you set the volume at the right level, you could pop the window in the background and let his voice roll off like a Gen-Z Johnny Carson (who gambles) while you get on with some more important tasks for the day. Such as playing for real money with that €20 free bet from Xposed. This is the new generation of affiliate marketing, and it is rising so rapidly that it will dominate most other forms of directed traffic to operators by the middle of this decade. Having started predominantly in Europe, there are dedicated streamers across pretty much most of the world. Some Japanese casino players trend as high as their European counterparts, and that’s just on Twitch – a predominantly Western-facing medium. Older stalwarts scoff at this medium, saying that properly scripted written content or well-placed media will remain stable revenue streams for affiliates. But they’re missing the point. Millennials and Gen-Zs don’t give a frack about most long-form content, and even if they did you’d have probably lost them somewhere around this paragraph anyway. To be fair, this is not just happening in gambling. Instagram and TikTok (and YouTube before it) had effectively segmented consumer behaviour between long-form and streaming content long before gambling had a look-in. With Twitch this has increased tenfold, distorting all the other revenue streams.

BIRTH OF A SCENE

The demographics are spot on: 82% of Twitch users are male, with 55% aged 18-34. This partly explains why Ubisoft and Epic have recently increased their pay packets for dedicated streamers (as opposed to professional esports players). And this is a crucial point. Because good promotion of product is very different to good playing of product. It’s the main reason why gambling streamers were very lacklustre until a couple of years ago. Initially most played with their own money, and did it just for the lolz, or more pertinently, for the follows. Then suddenly a raft of new-age players appeared almost simultaneously on the scene, each with great presenting skills and, crucially, good hardware for capturing and broadcasting high-quality picture-in-picture feeds. With them came the nascence of the brand-sponsored gambling streamer. To operators this was gold dust. Give the streamers some free credit, get them to showcase the best products, throw in a couple of promotions or two and you have a self-perpetuating relationship. Which means there’s a particularly cynical undertone to all of this. It’s astounding that even today – after an outright ban on all fake ‘I changed my life by gambling’ feeder sites – there still isn’t a clear narrative differentiating promoted streamer content. There’s little effort to make the case that the majority of streamers up the food chain are all effectively affiliates. Particularly those with €1,000 roulette spins. Honestly speaking, a well-curated stream is entertaining nonetheless, promoted content or otherwise. As long as the underlying agenda is clear, you can even get creative with it. Remember those ludicrous three-minute YouTube clips with guys winning the jackpot, blowing it all in Vegas and escaping with the private jet pursued by the feds?

So where do streamers go from here? Let’s start with the bad bits first: there’s no way that gambling streamers will continue unabated in their current form. If the regulated industry has clamped down with vigour on loot boxes, free bonuses, capped spending and even limits between spins, it’s only a matter of time before socialist legislative guns are pointed that way. But the actual limit of restrictions is likely to be quite moot. We’ll probably see some more obvious disclaimers about sponsored content and corporate responsibility, and that’s about it. There’s not much that can be done, not without some serious repercussions across the whole streaming medium about what’s permissible and what isn’t – and that is a legislative matter that could take years even to draft, let alone implement. The other downside is more of a general issue with the major streaming platforms than with gambling itself. It’s incredibly easy to get access to restricted content on sites like Twitch and YouTube, and we all know that stories such as ‘EVIL streamers lure KIDS to GAMBLE!’ will shortly pop up on all our favourite right-leaning news portals. Interestingly enough, there’s a solid defence here. It’s reasonable to argue that at any one time, freely available content such as Fortnite, LoL and especially CS:GO has significantly more graphic content and negative influence than a charming streamer trying to get a spin bonus. These implications could suggest the possibility of a complete shutdown of gambling products on some streaming sites, but as things stand it’s unlikely. Eyeballs are increasing proportionally with new – and live – content, which is essential to paying hosting bills. And there’s a perfectly legitimate argument (i.e. one that will hold water in a court of appeal) that says provided it’s properly gated and disclaimed, it’s no different to the likes of Hearthstone.

Having identified the issues with streamers, the upsides become significantly compelling and disruptive. Streamers are becoming strong brands in their own right and their fanbase enjoys momentum growth. What this means is that thanks to the long-tail effect of good content, eyeballs beget eyeballs, snowballing reputation and followers further. In fact, it doesn’t matter anymore how much is played and lost in a session as long as there’s a fantastic streaming experience. The endgame here is that streamers themselves become assets in their own right, with potential to be bought and sold to the right agency that can direct them to various content depending on the opportunity, i.e. price. Which also suggests that player lifetime revenue shares won’t be as lucrative as they used to be compared with the streamers themselves. Thus the new world order for operators will be more about securing the right streamer partners, as their outreach could far eclipse anything a marketer could achieve on a B2C level. There is a double-edged sword to this, and one that could significantly affect operators. It is quite likely that streamers will soon have the ability to divert traffic to and from various brands in a much more meaningful way than other forms of marketing. That would be a monumental pivot and would fundamentally alter the dynamics between operator, player and streamer. Operators would have to refocus their efforts onto these new B2B2C clients to ensure they retain brand favour with their core fanbase. This, then, will rapidly become the new normal. Captive ever more to the small screens given what’s going on outside, and having existing gambling product (and affiliates) hampered by legislation and regulation, viewer demand invokes a void that is gradually being filled by these new content creators. Initially free rollers, they are now major sponsored franchises in their own right, and given their current momentum, stand to gradually take over traditional viewing habits. Thus, assuming the streaming portals remain supportive, and properly caveat promoted content, the future for streamers will be bright indeed. And as they take over Europe as the dominant accessible medium into gambling, their methods are being emulated (albeit with changes) in the Americas and Asia over the coming years as well. One question remains: what will happen once the brand value of the streamers surpasses the value of the operator they’re promoting?